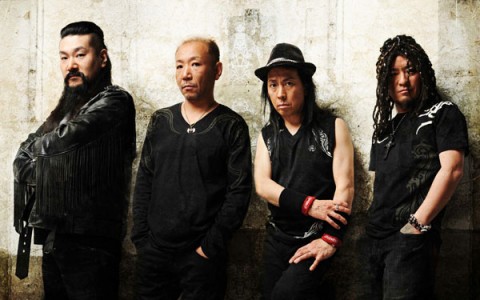 From the beginning of May to early June of this year, LOUDNESS toured the U.S. Accounts of the Los Angeles show described an eclectic mix of metal, rock and punk as well as curious new fans for a packed house.In Denver, the venue was heavier in rock with long time fans in concentrated numbers wearing band shirts displaying not only LOUDNESS, but also Metallica, Slayer, Alice in Chains and more. While at the Denver stop, we had the opportunity to chat with Minoru Niihara — vocalist of this legendary metal band — on the past, present and future. Enjoy the interview and look for their new album hopefully being released this fall!

Is this your first time in Denver?

I don’t think so. We’ve been here before, but it’s been a long time. We played at Red Rocks, opening for Motley Crue in 1986? Something like that. That’s in Denver, right?

Yes, Red Rocks is right outside Denver [in Morrison].

Okay, so yes, we’ve been here once before. This would be the second time.

Can you tell us how the tour has been so far?

We got here about twelve days ago from Tokyo, Japan [just before the tour started]. We’ve already played nine shows so far, almost without a day off. The shows have been good and the audiences have gone wild. But we’ve gotten tired. And some of the members have gotten sick. Being on a bus like this, the air is dry and dusty and it’s easy to get a cold. But we’ve got another fifteen shows in the next couple of weeks.

So you guys are in the bus for over a month.

LOUDNESS has been around for over thirty years. From the beginning to now, there are older fans, and also newer fans. At shows, do you see a lot of diversity?

Yeah, in this tour, I’ve been able to see a lot of people. Like people in their early forties or even fifties. That kind of generation. But a lot of diversity. Not a lot of young kids. I’d say that [sometimes] it can be up to 70% of older fans are the slightly older generation like in their forties.

With the differences in the music scene over the years, what were some of your favorite concert moments?

At the debut concert, I remember well. Because people had come to see LOUDNESS for the first time. I’d never performed before people before, so that had a very strong impact on me. Later, when we played Madison Square Garden with Motely Crue, that was a big impact, too.

Nationally and internationally, what has surprised you about groups that you have been inspired by or have inspired as LOUDNESS.

Interpreter: Everyone’s inspired by someone else, right?

That’s right. Looking at 70s rock music [such as Deep Purple]. Even myself, I was influenced by older people. James Brown, Aretha Franklin. When I was going to university, I used to sing in a blues band. So it was really kind of cool. For example, I never really thought I’d become a heavy metal singer. But now I am!

What are some of the things that have kept you motivated to continue making music.

Fans. All the people who are supporting or have supported LOUDNESS. That’s what really helps keep us doing what we’re doing.

Over the years, all of the band members have done individual projects as times. What’s different about being in other projects compared to being LOUDNESS?

Have you ever viewed your music in Japanese as being a barrier in reaching an international audience?

For rock music… no. I think rock music is from the Western end. Then we tried to make it our own style. You see the younger generation of bands, such as Dir en grey and X JAPAN are trying to get out of Japan and it seems like they’re doing pretty good [at that].

What is your take on the current metal scene in Japan?

There are always hardcore fans in Japan. It’s not huge anymore, though. Not like Jpop is now – the sort of big time happy music. That kind of music can sell millions and millions. But a hard rock or metal album sells in tens of thousands. And that’s still great. Jpop sells more than us. There are still strong hardcore fans, but no less and no more. [There’s a steady core group of dedicated fans].

Over the years, social networking, such as MySpace and Twitter, have been integral in connecting to an international audience. How has LOUDNESS used these kinds of resources to foster your fanbase or reach out to fans?

You know… I’m the only one who uses computer. The others don’t have an interest in it for some reason. They don’t like PC stuff, so… but myself, I have my own blog, a diary of stuff. People leave comments and I get emails from all over the world. Sometimes I’ll reply to them when I can. ‘Thank you for mailing me’, stuff like that. The Internet has helped get people close. No more distance from China, England, or Russia, or South Africa – doesn’t matter. We’re all close. Also, like tonight, we’ll play this show [being in Denver at the time], and 30 minutes after the show, it’ll be on YouTube! [I feel like] ‘I just played 30 minutes ago!’ And people comment on it! …it’s kind of scary.

What kind of projects are you working on right now?

We’re in the middle of creating our new album. All rhythm guitars, bass and drums are done. Only vocals and mixing needs to be done. Hopefully it will come out in November? I’m working on lyrics and after the tour, I’ll get the singing done for the new album.

I noticed that you’re also collecting for Tsunami relief on the tour as well?

Ah, yes, that was terrible. I was in Tokyo at the time of the earthquake. The shaking was like hell. I’ve been in Tokyo for over 30 years and I’ve never felt anything like that before. I was worried my house might shake apart, but fortunately, no damage, no harm. But about an hour later, on T.V., there was a report of the devastation further north. So yes, we’re doing what we can.

On a more sensitive subject, when Munetaka Higuchi passed away in 2008, it was a shock to many…

Yes. I’ve never lost a bandmate before. We’d become like brothers for over 25 years. There was emptiness in my heart when he was gone. I wasn’t able to do anything for a while and just think about him. What were we going to do without him? We kind of lost our way there. I knew he had cancer, but somehow, I thought that he’d be okay. It was very sad news. It still hurts. Among old guys, it still feels a little sad and lonely.

And now, there’s the café in his memory now, correct?

Ah, the café. Our manager handles the restaurant. I haven’t been there, though.

Can you give us a message for fans worldwide?

It’s our 30th anniversary this year. 30 years since we debuted. Thank you so much for supporting us all the time. We wouldn’t be here without you all. We wouldn’t be where we are today. We’ll work together for many more years. Come get crazy with us!