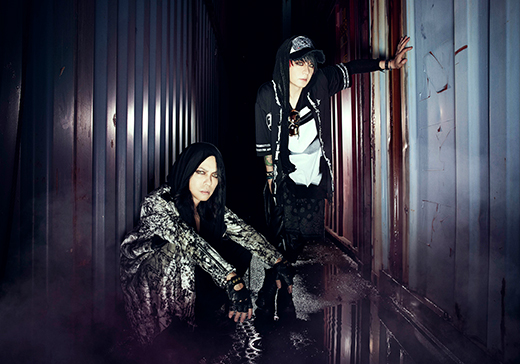 When VAMPS, Apocalyptica and Sixx:A.M. announced a tour together, one could already see it would be a badass show. VAMPS being from Japan, Apocalyptica from Finland and Sixx:A.M. from the U.S. promised a refreshing complement of styles and a conglomerate of fans usually reserved for festivals. The three bands definitely did not disappoint, delivering hard hitting sound and soul pounding energy to the masses that built from start to finish.

At 8pm sharp, VAMPS took the stage, wasting no time to crush into their first song, World’s End, from their latest album BLOODSUCKERS, which was released on March 24th in the United States. HYDE’s style of vocals has always been strong with L’arc en Ciel; with VAMPS, he’s had the opportunity to showcase rock and metal elements that deliver and then some.

Following Devil Side and Revolution II, HYDE spoke briefly to the crowd, starting out with a warm welcome, “Hello, Denver, we are VAMPS! We are very excited to be here!” For much of the performance, he carried a VAMPS flag with his striking presence highlighted by an open shirt with roughly painted ink stripes down his front. K.A.Z provided a cooler facade, commanding his section of the stage and enticing the crowd at times with rare gestures.

For their too short, half hour set, VAMPS pulled out all the stops. Memories followed and then a cover of a Motley Crue classic, Live Wire, a song that most seemed to know. By the time they ended with Sex Blood Rock n Roll, anyone not familiar with VAMPS had an awesome introduction. This powerhouse duo of HYDE and K.A.Z has made solid studio music, but it’s nothing compared to seeing them live and hearing their music as a living entity.

Apocalyptica followed and with their intro, a hush fell on the crowd to listen. From there, they built up the tempo, pulling the crowd into singing Nothing Else Matters, a Metallica cover. Their title song Shadowmaker followed from their latest album, half a heavy ballad, half instrumental meant to be absorbed as much as heard.

Fans sang along with I Don’t Care, bringing the energy back up to their last song, In the Halls of the Mountain King, a classical song that grew into powerful performance. At a couple of points during their set, Eicca swung his cello over his head to briefly play, most definitely not an easy feat. Truly, if you have not experienced cello as rock and metal, you are missing out. Apocalyptica is a must see band.

Sixx:A.M. were the headliner of the night, drawing the crowd into a frenzy right out of the gate and not letting up throughout their set. James Michael’s vocals were tempered with Nikki Sixx’s bass and DJ ASHBA’s guitar. Nikki Sixx explained that they had started jamming and making songs before they even had a band name. Now that they had time to devote to Sixx:A.M., he hoped they could be your band – the fan’s band.

VAMPS continues to tour with Apocalyptica and Sixx:A.M. until the end of the month. Check out their remaining tour dates below, along with their headlining show at the Best Buy Theatre in New York City on May 1st of this year.

Watch JRockRevolution.com for our contests on winning some cool VAMPS merch, including two autographed posters, a CD and their tote bag. Coming soon, we have an interview with Apocalyptica and more concert photos. Stay tuned!