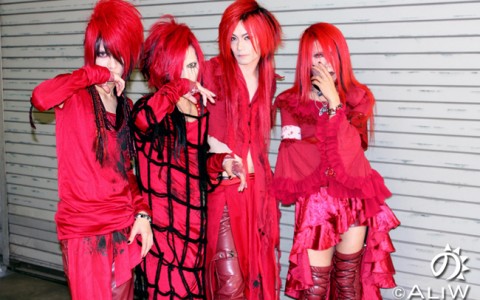 JRockRevolution.com had an opportunity to speak with CELL following their activities on Saturday. Enjoy!

JRR: How was the concert last night, and the crowd?

Kon: I was very excited over the unexpected reactions of the American fans. It’s my first time here, so I didn’t know what to expected, but I was overwhelmed.

JRR: What did you think of the crowd and how they reacted?

JRR: Have you encountered anything that was kind of a culture shock while here in America?

All: Everything is so huge compared to Japan!

Kon: The food portions are huge, I expected the food portions to be bigger here, but when I saw it, it was double the normal amount in Japan. I was very culture shocked.

Yuki: For Shin, it was perfect, because he eats a lot.

Nao: It’s almost perfect for me; I can’t finish it, because I feel like I’m going to explode.

Kon: You eat traditionally, so you eat everything.

[Note: In Japan, it’s not good to leave leftovers on your plate.]

Yuki: You can feel it in your belly.

JRR: How did you first become interested in music?

Kon: I wanted to play some kind of an instrument at first. Since I was very young, I thought a vocalist didn’t need instruments, and it was inexpensive that way.

Nao: I started off watching anime and movies, then I started becoming interested in music, and soon I discovered hide. With his influence, I started playing guitar.

Shin: I was strongly influenced by my friend at the time who also played guitar. As I started playing, I got into it more and more.

Yuki: I had an early finish on my entrance exam for a university in Japan, so I had four months to just mess around. I was just waiting for graduation, before that I used to play a lot of games like Dragon Quest and Final Fantasy. I was really interested in that music…but I decided to play bass during that time off.

JRR: We’ve already touched on hide…but what are some of your other early inspirations?

Yuki: He’s a great folk artist. Search him on youtube!

JRR: Your costumes are red today, last night they were white and red, what is the concept behind the outfits?

JRR: Where else in the world would you really like to play?

Yuki: Germany and England, Great Britain, Mexico…it goes on and on…

JRR: What have you thought of Anime Expo so far and seeing everyone dressed up?

JRR: If you guys were to cosplay, who would you cosplay?

Yuki: Have you cosplayed him?

Kon: I would cosplay Darth Vader.

Shin: I would be Darth Maul.

JRR: What is your favorite food you had here in America?

Kon: The hot dogs they sell out front.

Shin: Krispy Kreme doughnuts. We have them in Japan…there really isn’t a difference…but it’s the fact we’re eating them here in the States. [laugh]

JRR: What are your thoughts on the growing popularity of Visual Kei around the world?

Kon: We’re very happy. Delighted. I feel like Japanese culture is spreading throughout the world.

JRR: What would you like to accomplish within the next five years?

Yuki: I would like to own a house here…to live here…

Yuki: IN VEGAS! But I like the beach more, so maybe Los Angeles.

Kon: I would like to have a headlining concert here in the states.  I want to go to other countries and become bigger and bigger.

JRR: Do you feel that social media such as Facebook and Twitter helps you connect with fans?

Kon: There’s a lot of non-Japanese fans communicating through those media sources, so it’s a good thing.

Shin: It’s also the time lapse. They can get the response immediately in that way. I think there are a lot of fans who found out about this show through social media.

JRR: Is there one thing you always seem to forget to pack on tour?

All: You guys are going the opposite of what everyone has asked! [laugh]

JRR: And a message for fans.

All: We will be evolving and growing as CELL so please continue to support us!

Special thanks to CELL and CURE Magazine for their gracious time.