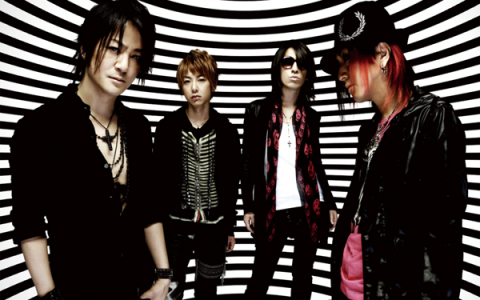 What does it take to make a legend? For this band: passion, dedication and a dash of good luck. Over their twenty year career, GLAY has risen from their humble beginnings in high school to sold out shows, festivals, and an increasingly large international fanbase.

To say GLAY has had it easy suggests that every high school band can rise to the same heights. Some can—if they have what GLAY has had in spades from the very beginning.

Music was something all of GLAY had in common. Each member had played in different bands and enjoyed listening to different styles of music before the four members became one entity, performing music full of passion. Despite every obstacle, GLAY has persevered, dedicating themselves to their music and their dreams. In 1993, it was Yoshiki of X JAPAN who signed them to his new label: Extasy Records. When their first single, “RAIN,” made an impact, the climb to the top seemed inevitable. “BEAT OUT!,” their second album, became their first #1 hit and marked a well deserved accomplishment for a band who couldn’t be easily defined as rock or pop. In fact, wanting to make rock (black) as well as pop (white) music spawned their name. They wanted to be “gray” or GLAY.

Defying labels is something GLAY does very well, not only in their music, but in their other endeavors as well. But in the end, what matters is that GLAY has become a band with a strong foundation: Takuro and Hisashi on guitar, Jiro on bass, and Teru on vocals.

Where else will GLAY take us in the future? Only time will tell, but in the meantime, we’ve been excitedly anticipating their US shows in San Francisco and Los Angeles.

GLAY played at The Filmore on August 12 in San Francisco and will continue their tour with two dates at the House of Blues Sunset Strip on August 15 and 16 in Los Angeles.

In 1990, TAKURO, TERU, and HISASHI moved to Tokyo: joined by JIRO, the four-member GLAY made it’s major-label debut with the single “RAIN” in 1994.

“GLAY-ONE LOVE in Beijing,” a special concert held Oct. 13, 2002 at the Beijing Worker’s Stadium to commemorate the 30th anniversary of normalized ties between Japan and China, was one of the biggest concert in that country’s history.

anniversary of their major-label debut, GLAY played to an audience of 100,000 at Universal Studios Japan. The major-stadium tour that kicked off in Feb. 2005 was als

In Feb. 2006, the group performed on a circular stage at Nippon Budokan, and on July 12 they released “G4,” their first single in 19 months.

The single “VERB,” released on Junes 11, includes (in addition to the title track produced during the latest tour) “STARLESS NIGHT” and “-VENUS,” both streamed in advance of release, and a cover of “WITH OT WITHOUT YOU” by U2, whom GLAY have always admired.

Keep an eye on JrockRevolution.com for more exclusive GLAY coverage!

Original article can be viewed here.