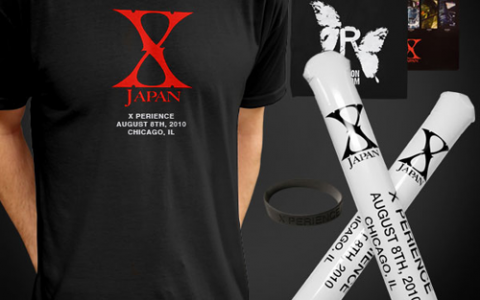 One of the coolest experiences I’ve had being with JrockRevolution.com is designing the bulk of the official X JAPAN X Perience fan package for their August 2010 debut performance at Lollapalooza in Chicago, IL.

There are 5 elements of the package – t-shirt, ‘thundersticks’, tote bag , bracelet and photo. While some very talented designers put in some great designs, ultimately we were informed simple was better. I submitted an idea and not only designed most of the package, but I also designed the print flyers and some of the web graphics.

The images here are courtesy of our merchandise site at GoMerch, which you can find here.